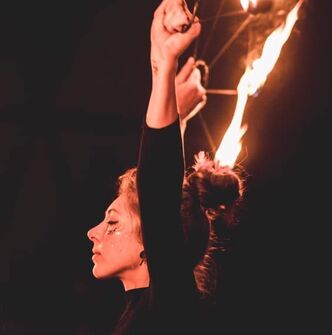 Performance has always been in Inferno Ash's blood, and as a child she participated in musical theatre classes and trained her body in ballroom dance and gymnastics, completing qualifications in all to high levels.
She went on to gain a BA(Hons) in Theatre Studies at The Roosevelt Academy in Holland, where she also ran the theatre committee, directing and acting in multiple plays. Following her degree course she taught drama at various performing arts schools such as Stagecoach and Starcast. Since the age of 19 she had dabbled with circus props, but it was in 2013 when she attended a weekend clown workshop in London that she decided to dedicate her life to physical theatre and circus.

She completed a 1.5 year long European Voluntary Service project for Malom Film-Theatre in Hungary, where she co-ordinated and lead performance based workshops for the local community focusing on physical theatre.  She also had the opportunity to put on shows in the theatre and to collaborate with visiting performers such as Scotland's street theatre company Oceanallover.  Throughout this period she was training with Budapest circus performers on weekends and learning from visiting physical theatre and dance masters.  Her fascination with physical theatre encouraged her to enrol on a year-long Diploma in Physical Theatre Practise which she did in Edinburgh, specialising in street shows. She created a street show which she performed at the Edinburgh Fringe Festival, as well as in London and in Cyprus, as she travelled around these places in 2016 - 2017.

She has traveled America working for Starfish Circus and was an artist in residence at Penasco Circus Theatre, New Mexico.  She has toured with UK based big top circuses Circus Petite and Harris and Aspinall's, as a hula hoop artist, fire dancer, and with a duo whip act with circus performer extroardinaire Captain Rumbucket!  She broke 2 Guinness World Records in 2017 in an effort to raise money for PAWS dog shelter in Cyprus, both records combining hula hooping and acrobatic/flexibility poses.

She takes her clowning very seriously and has trained in Paris under clown maestro Philippe Gaulier, as well as with renowned clown professors such as Mick Barnfather and Angela de Castro.   In 2020, despite the worlwide pandemic, she managed to perform at - and win - the Greatest Ever Yorkshire Showoff event, with her comedy hula hoop act The Fastest Hula Hoop Act in the World.  Mid-pandemic she received funding from The Arts Council England to help her continue to develop as a performer in these turbulent times. She used this time and funding to create a new street show to be performed at festivals Europe-wide from 2021 onwards. The show incorporates clown, magic, hula hoops, acrobatics, flexibility and audience fun and games.  Her specialisation lies in act creation and development and she loves helping others accomplish their goals.
​
Her motivation is to keep creating, to keep developing, to keep learning and to keep teaching, in order to be the best performer and teacher she can possibly be in this lifetime.