The Voices in my Head 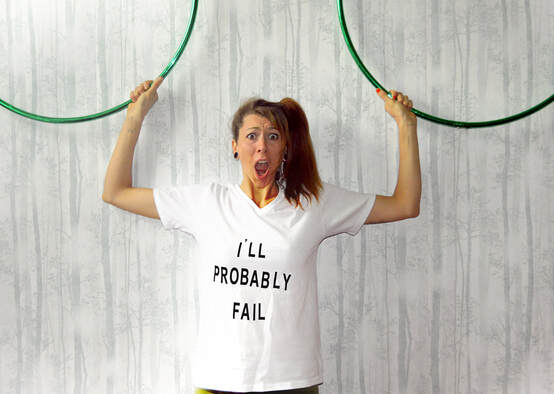 A brave, honest and loosely improvised exploration of the feelings some (or many?) performers have relating to anxiety, depression and self-loathing, focussing in particular on the swirling cycle of negative voices that attempt to dictate our actions.
Inferno Ash mixes hula hoops, comedy and mental health issues in this incredibly innovative piece, with the support of Sheffield's Theatre Deli. Recently inspired by clowns Mick Barnfather and Rick Allen after having been mentored by them, she decided once and for all to incorporate clowning into a piece, leaping straight into the deep end and combining it with a serious issue.  'The Voices in my Head' is a live depiction of the struggles it takes to do what she really wants, finally, despite having constant reminders of failure, she chooses to embrace this.
What did audiences think about The Voices in my Head?
" Funny, but also painfully real - a great balance"
" The incorporation of circus tricks into a narrative about mental health was really original and interesting"
" It spoke volumes about the importance of valuing and appreciating the arts"
" A powerful metaphor well delivered"
" I thought the use of clothing to represent the negative thoughts was clever. I felt able to identify with the performer despite having a different lifestyle."